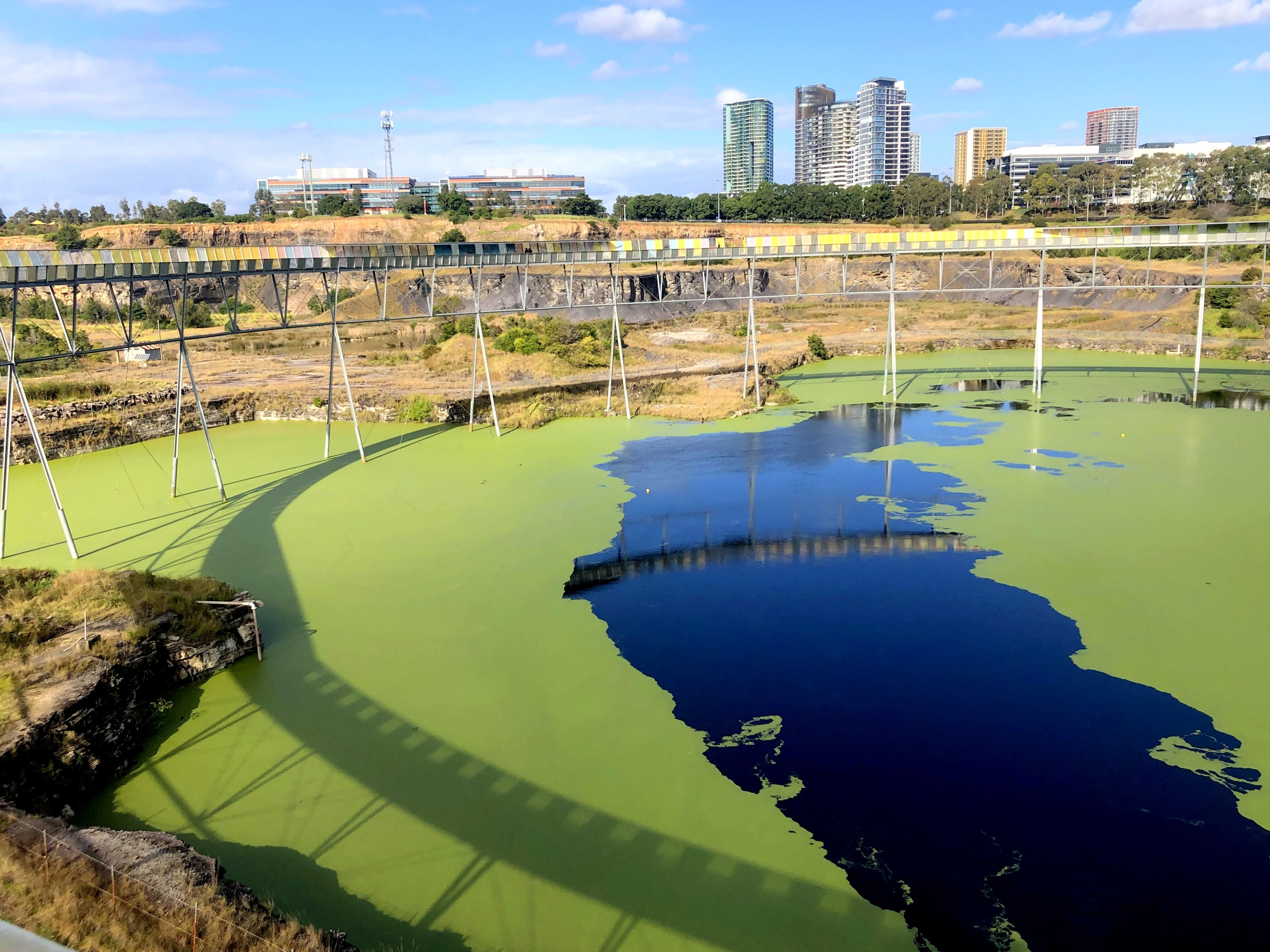 On first mention, you will not even bother to think twice of this place. Un-evocatively named the ‘Brick-pit Ring Walk’, it will sound too urban, uncultured, and uninteresting. The truth cannot be any far from that. The picturesque steel ring, uplifted 20 metres in the air on stilts, is splashed with pastel colours and is tucked away, obscured, in one corner of the Sydney Olympic Park area. Not only is it a peaceful calming walk upon a shamrock green lake but is also one powerful download in zoology and geology.

Once upon a time, this place used to be a – guess what, brick-pit! Over a hundred years back, the NSW government decided to break the monopoly of private brick manufacturers, leading to the set up of the State Brickworks here (it ran into initial problems around set-up as the private players refused to provide bricks for the establishment!) The State Brickworks provided jobs during the depression but was shutdown in the 1940s, only to be resuscitated few years later when there was an acute shortage of bricks. The second chapter ran longer until the brick-pit was shut-down in the late 80s. The manmade quarry created a chunky depression in the hill that soon turned into a freshwater wetland.

The story doesn’t end there – in the run up to the Sydney Olympics, this area was earmarked to be converted into a tennis court (the Millennium Olympic village is a few hundred metres away). Which was when green and golden frogs were found inhabiting the wetland. Once abundant all-over eastern Australia, the species has become vulnerable owing to loss of habitat, introduction of foreign species along with the impact of the chytrid fungus that has been decimating amphibian and ranine life all around the world (along with the impending spread of the cane toad that might very soon invade Greater Sydney). The prescient government decided to spare the wetland thus creating a reserve for the green and golden frog, along with the installation of this ring walk and its beautiful displays – all to enlighten future generations like ours, and to provide a viewing platform for the protected frogs without disturbing their habitat. Wildlife 1, Urban development 0 – little bits that every Sydneysider should inculcate and be proud of!

As I walked around the 550-metre round ring, I was quite impressed. The lake beneath was glistening in green, the mossy surface giving way to large swathes of indigo blue, while black swans, moorhens, and coots glided on the nutrient rich waters, scouting for food, and leaving their ethereal trails on the waters. A few old houses on the edge of the lake added some colours of history, while the upmarket residential towers and stadia floodlights in the background reminded of the delicate balance between man and wild.

The educational displays also provided an interesting lesson in Sydney’s geology. The deep excavations into the ground provides great exposure to the formation of Sydney. About 200 – 250 million years back, when Australia was joined to Antarctica in the Gondwanan supercontinent, Sydney was the delta of a mighty river that brought with it, massive debris of sand and clay. Over time, the sand was compressed to form sandstone (known as the ‘Hawkesbury Sandstone’), while the upper layers of clay were compressed to form shale (known as the ‘Ashfield Shale’). Many of Sydney’s heritage buildings, particularly in the CBD – such as the Town Hall and the Central Station are all encased in this beautiful yellow sandstone. In fact, sandstone was particularly quarried at the brick-pit extensively in the last few years of its operation to create reserves of the building material for future renovations of Sydney’s heritage building.

Over 60 million years earlier, by which time, Australia had separated from Gondwanaland, tectonic plate movements buckled to create the Blue Mountains in the west, while also creating the undulations that you can see in hilly Sydney today. Western Sydney sank in the process, and in comparison to the higher and hilly parts of Sydney, saw far lesser erosion of the upper layers of shale – creating an extremely thick layer of Shale in the brick-pit region. Shale disintegrate easily, creating dirt that is perfect for brick-making, explaining why the brick-pit was perhaps in a perfect location, summing millions of years of geological history! Today Sydney is a drowned river valley, with water levels rising by up to 120 metres at the end of the last ice age, some 10,000 years ago – the actual delta to that massive river that led to the sandstone and shale formation was perhaps some 20 kilometres further into the sea.

My head was reeling with the overwhelm of this information, when I realised how much there is to know of our wide world. Well, we cannot know everything, but we can at least strive to keep learning, and be on the lookout – you can never know what you can learn, even from something that sounds so urban, uncultured, and uninteresting as the Brick-pit!